To order a Colour of Words shirt, please send us an email with the text you would like transcribed. 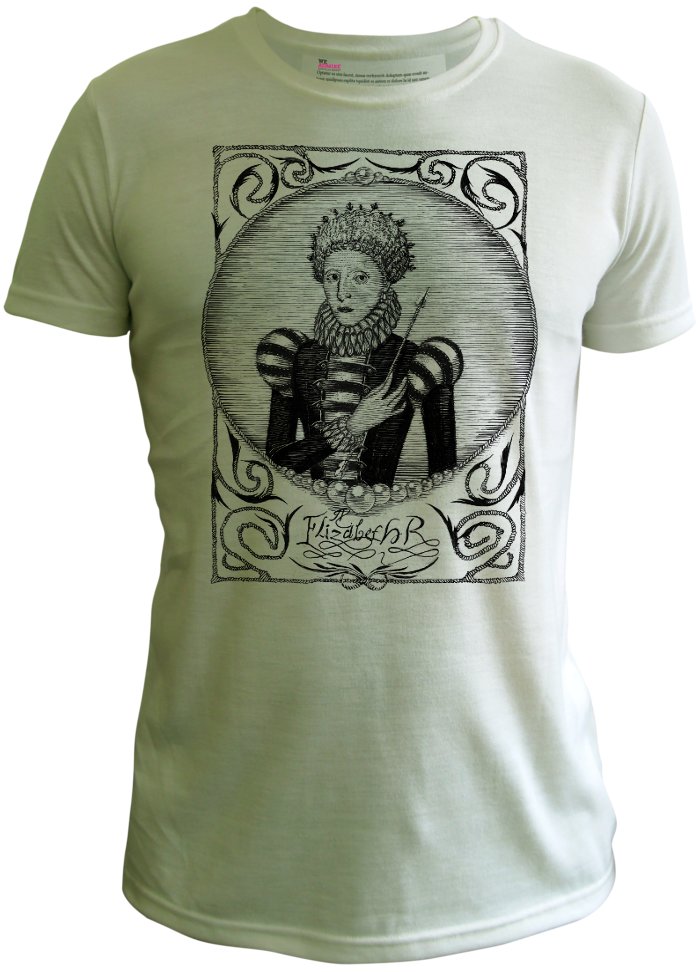 "What a woman, and what a monarch! Queen Elizabeth's 45-year reign is considered one of the most glorious in English history. Elizabeth I - the last of the Tudor monarchs - was born at Greenwich on 7 September 1533, the daughter of Henry VIII and his second wife, Anne Boleyn. Her early life was full of uncertainties, and her chances of succeeding to the throne seemed very slight once her half-brother Edward was born in 1537. She was then third in line behind her Roman Catholic half-sister, Princess Mary. Roman Catholics, indeed, always considered her illegitimate and she only narrowly escaped execution in the wake of a failed rebellion against Queen Mary in 1554. Elizabeth succeeded to the throne on her half-sister's death in November 1558. She was very well-educated and was fluent in six languages, having inherited intelligence and shrewdness from her parents. Although autocratic, Elizabeth had astute political judgement and chose her ministers well; Sir Francis Walsingham who excelled as a principle secretary and spymaster, William Cecil 1st Baron Burghley as Secretary of State and Lord Treasurer, and Christopher Hatton who was Lord Chancellor. Elizabeth's reign saw many ambitious voyages of discovery, including those of Francis Drake, Walter Raleigh and Humphrey Gilbert, particularly to the Americas. These expeditions prepared England for an age of colonisation and trade expansion, which Elizabeth herself recognised by establishing the East India Company in 1600. Not only was adventure and discovery a signature of her time on the throne, but the arts also flourished. The theatre thrived - the Queen attended the first performance of Shakespeare's 'A Midsummer Night's Dream' while composers such as William Byrd and Thomas Tallis worked in Elizabeth's court and at the Chapel Royal, St. James's Palace. Imposing architectural gems such as Longleat and Hardwick Hall were built. However, Elizabeth's reign was not all about incredible success and innovation. It was also one of considerable danger and difficulty, with threats of invasion from Spain through Ireland, and from France through Scotland. Much of northern England was in rebellion in 1569-70. A papal bull of 1570 specifically released Elizabeth's subjects from their allegiance, and she passed harsh laws against Roman Catholics after plots against her life were discovered. Happily by 1588, aided by bad weather, the English navy scored a great victory over the Spanish invasion fleet of around 130 ships - the 'Armada'. The Armada was intended to overthrow the Queen and re-establish Roman Catholicism by conquest, as Philip II believed he had a claim to the English throne through his marriage to Mary. This victory came at a price. During Elizabeth's long reign, the nation also suffered from high prices and severe economic depression, especially in the countryside, during the 1590s. The war against Spain, together with other campaigns, was very costly. As a consequence Elizabeth left large debts to her successor, even though she kept a tight rein on government expenditure. Despite the combination of financial strains and prolonged war after 1588, Parliament was not summoned more often. There were only 16 sittings of the Commons during Elizabeth's reign, five of which were in the period 1588-1601. Although Elizabeth freely used her power to veto legislation, she avoided confrontation and did not attempt to define Parliament's constitutional position and rights. Elizabeth chose never to marry. If she had chosen a foreign prince, he may have drawn England into foreign policies for his own advantages (as in her sister Mary's marriage to Philip of Spain); marrying a fellow countryman could have drawn the Queen into factional infighting. Elizabeth used her marriage prospects as a political tool in foreign and domestic policies. The 'Virgin Queen' was presented as a selfless woman who sacrificed personal happiness for the good of the nation, to which she was, in essence, 'married'. Overall, Elizabeth's always shrewd and, when necessary, decisive leadership brought successes during a period of great danger both at home and abroad. She died at Richmond Palace on 24 March 1603, having become a legend in her lifetime. The date of her accession was a national holiday for two hundred years. The Queen is dead. Long live the Queen! We Admire Queen Elizabeth 1st. Wear our Queen Elizabeth t-shirt and show your appreciation of this nation's mighty leader. This excellent portrait of Queen Elizabeth I is one of two Women Who Ruled by Anastasiya Tarasenko.

Our t-shirts are unique for being wholly made with CoolMax freshFX. CoolMax is a patented fibre designed to wick perspiration and accelerate moisture evaporation, keeping wearers cooler and drier. This wicking feature of the fabric is made possible by micro channels engineered into the profile of and surface of the fibre. These channels are cleverly dimensioned to exploit the surface tension and capillary action of water. Being physical properties of the fibre, these channels endure and do not significantly diminish with wear or washing.

Antimicrobial (freshFX) treatment stops the propagation of odour producing bacteria. This is achieved by embedding silver salt crystals into the structure of the fibre. FreshFX treatment like the wicking is permanent and does not leach out with everyday use. These characteristics ensure the shirts remain cool, dry and odour free regardless of what you might do in them. Performance of the fabric is guaranteed through a certified and monitored manufacturing process.

© 2021 WeAdmire Ltd. Made in Shoreditch, London